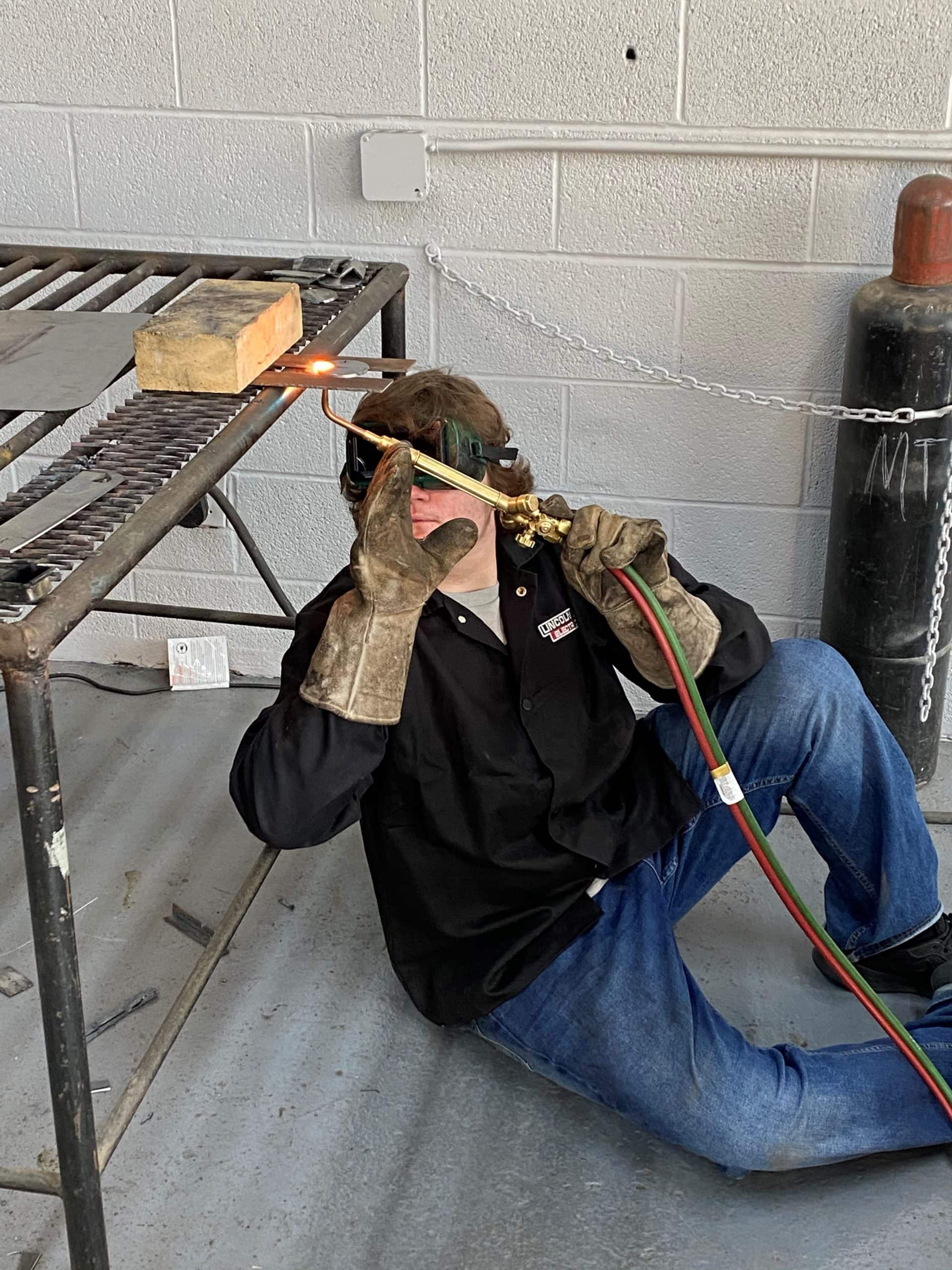 Britt Hedlund knows progress can be a slow process, especially when it comes to attracting and developing the skilled workforce of tomorrow in small, rural communities like Harper County, Kansas.

However, through her work as coordinator of the Harper County Transition to Career Program and its partnership with local AEM member company Harper Industries, Hedlund recognizes it takes the right combination of engaged stakeholders, hard work, and good fortune to build a strong workforce pipeline capable of sustaining itself over time.

“We started with – quite literally – nothing,” said Hedlund.

THE CHALLENGE AT HAND
To understand just how impactful the Harper County Transition to Career Program is – and has the potential to be – one must consider just how challenging it’s been for local businesses in and around Harper County to find, train (and eventually retain) workers in the skilled trades. Located in south-central Kansas and just a few miles north of the Oklahoma border, Harper County boasts a population of fewer than 6,000 people, while the Town of Harper itself is comprised of just 1,500 citizens.

“And unfortunately, we’ve found ourselves in a scenario where the workforce available is quite limited, and finding skilled workers has been a challenge for us for a long time,” said Luke Thornton, vice president of operations at Harper Industries, a manufacturer of bale beds, hydraulics and turf and landscape equipment based in Harper.”

In the past, we’ve tried partnering with our local schools in an effort to start creating a workforce pipeline, but the trouble was, every time we started making some progress and establishing some relationships, an instructor would end up leaving the community, and we’d have to start all over again,” Thornton added.

Now, however, there’s reason for hope and optimism – and it’s largely due to the efforts of the Harper County Transition to Career Program and its successful ability to expose young people to careers in the skilled trades, develop their skills and provide access to meaningful work experiences.

“Ultimately, we’re trying to individualize their education, help them establish goals, and set them up for post-secondary success,” Hedlund said.

BUILDING A POSITIVE PERCEPTION OF THE SKILLED TRADES
Spreading awareness of good-paying employment opportunities available locally is crucial to the health of any community, but it’s a task often easier said than done. Such has been the case for businesses and area organizations in Harper County. However, in working together, Hedlund, Thornton – along with other stakeholders within the community – have been able to offer job-shadowing opportunities, internships, education, training, and more to local students in two area school districts.

And thanks in large part to a budding partnership with Harper Industries – one which led to the successful development of a welding program for students in Harper County – efforts to engage young people in Harper County regarding the value of building a career in the skilled trades have never been more successful.

“We’re very lucky to have some fantastic local instructors who are plugged into our community,” explained Thornton. “Many are from the area originally, and a lot had different careers before moving into education because of their passion for education.”

AN ONGOING EFFORT
As she worked to get the Harper County Transition to Career Program off the ground, Hedlund knew it needed support from the community and – perhaps more importantly – the manufacturing industry it sought to serve. So, when she came across AEM’s Next-Gen grant program two years ago, which planned to award five non-profit organizations $10,000 each to assist in the efforts to support the future of the manufacturing and trades workforces, Hedlund jumped at the opportunity to try and secure some much-needed funding for the welding program being developed in collaboration with Harper Industries.

“If there’s one thing that’s needed in our area and across our state, it’s welders,” said Hedlund. “Our schools just don’t have the money right now to invest in a welding program that would allow young people to gain certification through the American Welding Society. So, when I saw the grant, I applied for it and received it, and it allowed us to get started on buying the necessary equipment.”

Hedlund also pointed the workforce development efforts of AEM member company Vermeer Corporation, which she learned of by attending a conference a few years ago, as a blueprint of sorts for her in developing the Harper County Transition to Career Program. After contacting company officials in the weeks following the conference, Hedlund was able to travel to Vermeer’s headquarters in Pella, Iowa, and learn more about how Vermeer is tackling the skills gap and providing opportunities for professional development in its own community.

“I was then able to take what I learned, bring it back to Harper County, and scale it down for Harper Industries,” she added.

Hedlund also went to work trying to find students for the program, which eventually led to a collaborative partnership between three school districts in Harper County and Wichita, Kansas-based community college WSU Tech. Now, Harper County boasts a welding program with a morning class for 10 students, and plans are in place for it to grow into a two-year program with morning and afternoon class sessions later this year. In addition, efforts are underway to ensure an intern can start at Harper Industries this coming semester to provide additional work-based learning opportunities.

In addition to offering chances to gain real-world experience and obtain certifications necessary for securing full-time employment, the welding program offers students the chance to secure 10 hours of college credit for their first year, and as many as 10 for their second year.

“That’s a really good start for a college degree if that’s the path they want to take,” Hedlund continued. “And without AEM, we could never have gotten started on this program.”

According to Thornton, the successful launch of the welding program is largely due to a few key factors: the right timing, a little bit of luck and a whole lot of hard work and collaboration.

“We wouldn’t have had the ability to do something like this on our own,” he said.

“The right people driving this makes all the difference,” said Thornton, who noted the students from several districts now have access to college-level courses because the welding program instructor has the proper certifications. “If we didn’t have the instructors we have now – along with the work being done by (Britt Hedlund), I’d be sitting here today still wondering how we could go about making something like this happen. So, having these talented driven people – and having them work together – has been key.”

The proof, however, is in the results. According to Thornton, a Harper Industries intern is poised to graduate from the program in May and seek full-time employment at the company shortly thereafter.

A BRIGHT FUTURE AHEAD
“And that’s just the beginning of it,” explained Hedlund. “Moving forward, we can expect a greater number of students who are ready to get to work when they get out of high school and, more importantly, have the skills they need to enter the workforce. And to know our students can be part of the work that Harper Industries is doing, and be a part of our community, is just so amazing.”

Manufacturing will continue to evolve with time, and the needs of the companies in the industry will change with it. As a result, it is critical for organizations to be able to connect with the workforce of tomorrow, inspire them to strongly consider a career as a skilled worker, and – hopefully – develop them into qualified employees. It’s a tall task, and it’s one that requires people to come together to develop practical solutions for tackling the skills gap at the community level.

“The goal, overall, is to try to create a manufacturing pathway for students. The partnerships are so important for a smaller community, and we’re trying to work together to develop our workforce and help the students in the process,” said Thornton.