Against the backdrop of severe drought conditions across California, the city of Santa Barbara faced an extreme challenge: how to bring its Charles E. Meyer Desalination Plant back online after nearly two decades in standby mode, while completing the project against tight time, budget and environmental constraints.

The project was further complicated by the discovery that an eight-foot section of the 36-inch sub-sea intake line, located 2,500 feet from the shore and under 50 feet of water, was missing.  The pipe was removed when the plant was placed in standby mode in 1992.

With the intake pipe in need of repair before the project could proceed, the clock was ticking with the team having just six weeks to find a solution.

Engineers and contractors first considered running an unrestrained flex coupling to rejoin the missing section, which would require anchoring it to the ocean floor to restrain the pulling forces created by the 80 pounds per square inch (PSI) underwater pumps. However, they decided against this approach because it would require concrete thrust blocks to be poured underwater in an environmentally sensitive area, which would add several weeks to the already tight schedule.

Until then, not many engineers had used a grooved HDPE pipe for abrasive intakes, especially at desalination plants, given the corrosive nature of abrasive on metal used in traditional joining methods. The Victaulic approach promised an ideal solution for the extreme, underwater environment. The products offered extreme durability – rugged enough to withstand the physically demanding operating conditions including corrosion risk. The products provided reliability for the life of the system, in this case 100 years. The benefits of greater durability and reliability were all gained while dramatically speeding installation times, an approach that was 10 times faster than other the alternative fusion weld.

Retrofitting a Power Unit to Support Underwater Pipe Grooving
To complete the entire installation underwater, Victaulic needed to repurpose its cut grooving (CG) tool so it could groove the pipe end after being submerged. Traditional Victaulic CG tools require electricity and electric motors to run, posing a significant challenge for the team since their target was 50 feet underwater. Victaulic retrofitted a CG3500 tool to run on a hydraulic motor with a hydraulic power unit being located on top of the barge, making it the preferred choice to cut and groove the sub-sea pipes. Once they knew the CG3500 would operate and function properly underwater, Victaulic made additional enhancements to protect the tool from corrosive saltwater before commissioning it to complete the task.

Overcoming the Challenges of Aligning Couplings in Strong Ocean Currents
The next hurdle was the strong ocean currents. With currents pulling the pipe ends in different directions, experts knew aligning the pipe ends for installation would be extremely difficult. The self-aligning Style 908 coupling provided a quick and unique solution to this issue, allowing a diver to insert the two ends into the coupling and have confidence that the pipe was properly installed. These currents also posed a threat to the stability of the installed pipeline. To ensure the pipe would remain intact and without the need for maintenance, Victaulic assembled the coupling using super duplex internal stiffeners in order to reinforce the pipe end.

Check out this installation video: https://www.youtube.com/watch?v=zZtowC5jULo

Withstanding 100 Years of Exposure to Corrosive Seawater
In the final stages of planning and development, Victaulic and its engineering partners had to be sure the equipment would maintain its strength and durability after being exposed to corrosive seawater. To ensure the Style 908 coupling could withstand 100 years of underwater service life, the coupling housings were coated with fusion bonded epoxy to eliminate the risk of corrosion and 50-pound Zinc anodes were affixed to the housing bodies to provide the necessary cathodic protection.

Total Installation Time: Two Hours
After several days of training and preparations aboard the barge, it was time for action. One diver accompanied the CG3500 from the barge to the ocean floor. The pipe was grooved successfully in 90 short minutes. The coupling was installed within 30 minutes, with a total installation time of two hours.

Now operational, today the facility has the capacity to produce three million gallons per day. This is equivalent to 3,125 acre-feet of water annually, or about 30 percent of the city’s water supply needs.

The project provides another example of why Victaulic is the partner of choice in extreme conditions: proving that an HDPE pipeline can be fully prepped and installed in sub-sea environments in record time.

Learn more about other Extreme Innovation projects completed by Victaulic at https://www.extremeinnovation.com 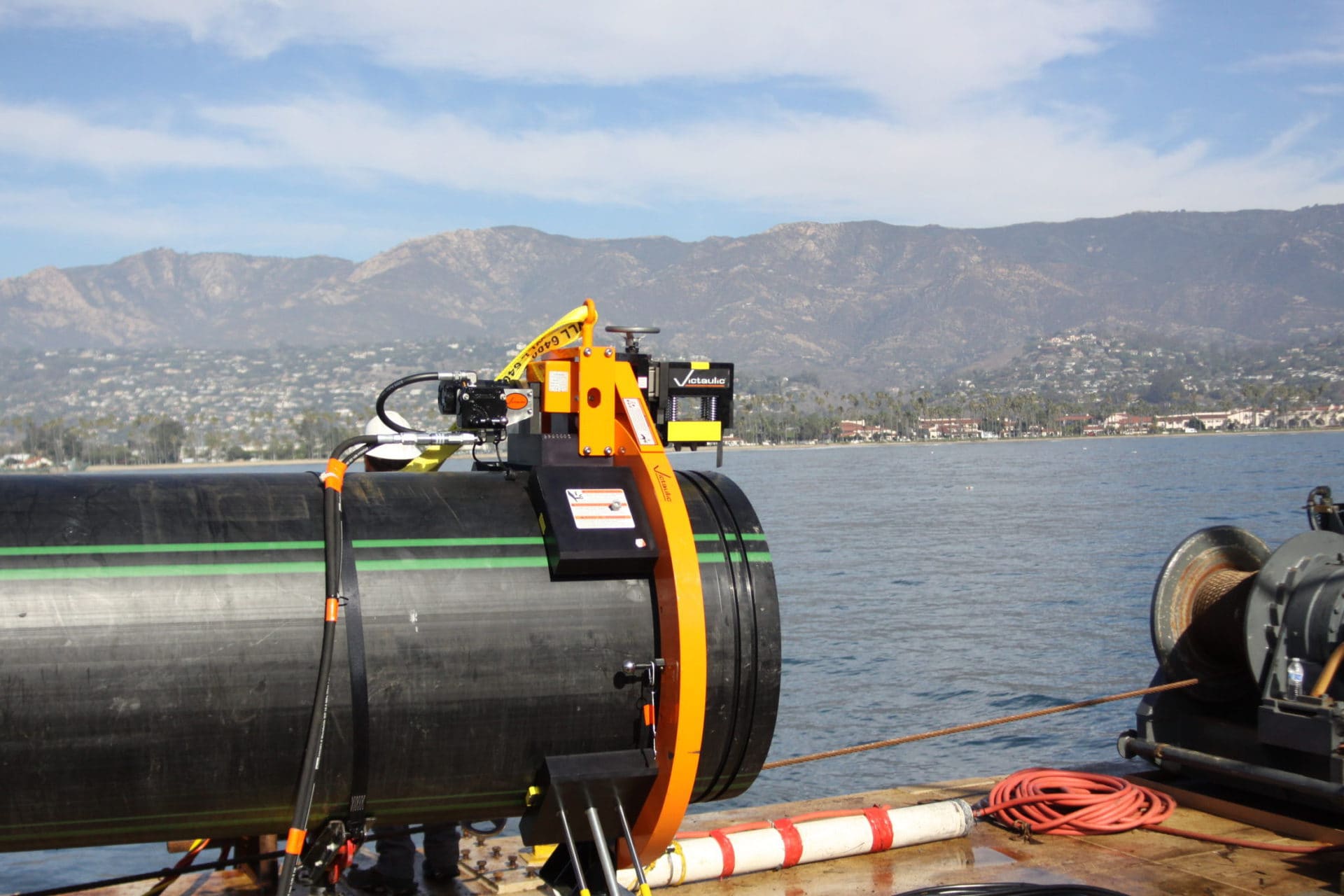 The grooved eight-foot section of the 36-inch sub-sea intake line is prepared for submersion, 50 feet underwater. 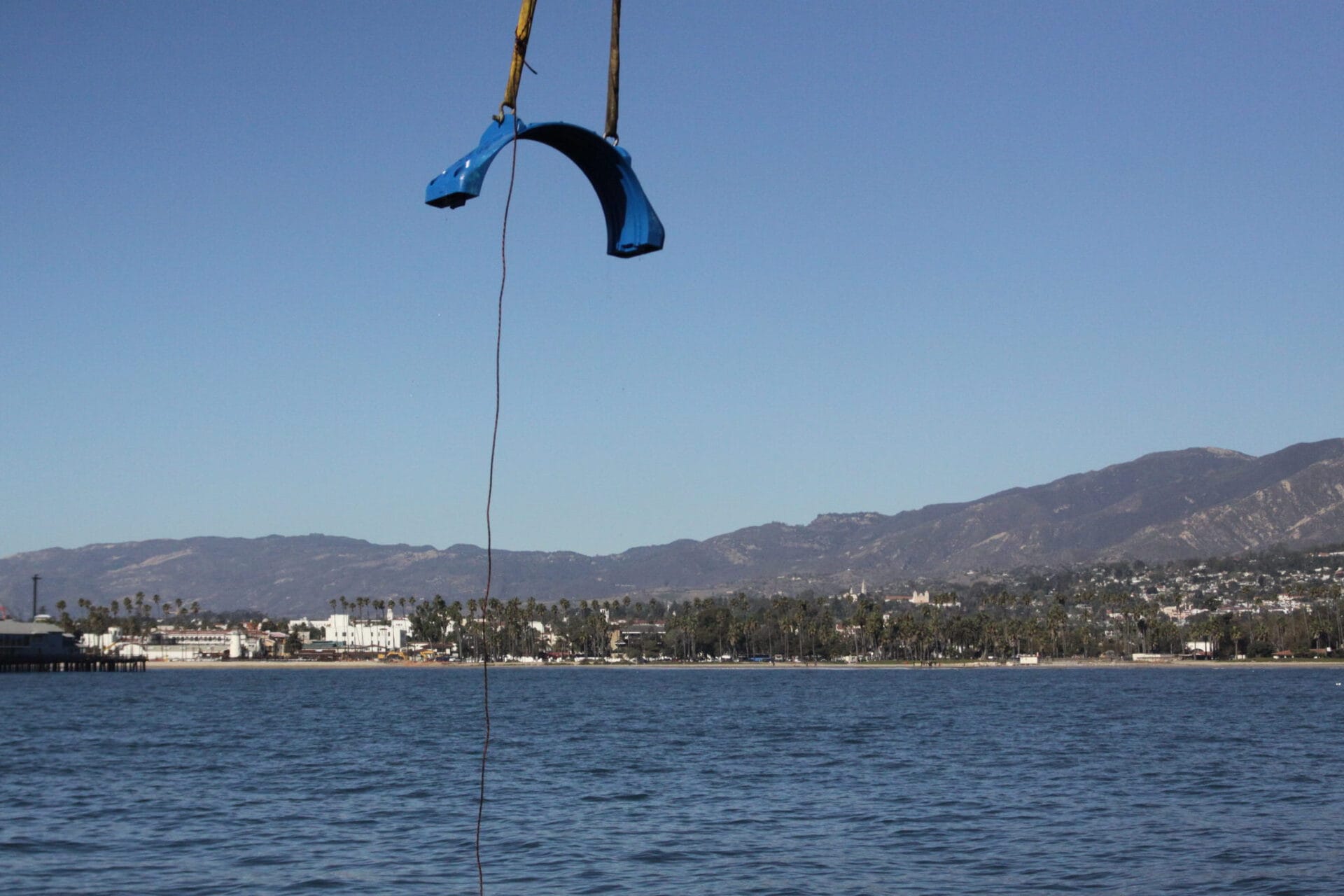 Victaulic’s self-aligning Style 908 coupling, coated to eliminate risk of corrosion, is lowered into the sea for quick installation.

Since 1919, Victaulic innovation has established the company as a world leader in pipe-joining and flow control solutions. The company would like to invite social media users to share their findings of Victaulic’s products using the hashtag #iSpyVic. Search this hashtag to spy Victaulic products at famous locations around the world, including the new Avatar Flight of Passage ride at Disney World.

If you are a CURT member doing something innovative and interesting, and if you’d like to share the story with the entire CURT membership, reach out to the office by calling 513-563-2773, or by emailing Ronna DuBro at rdubro@curt.org. CURT is interested in telling its members’ stories in Blogs similar to this one. And a special thank you goes to valued member Victaulic for allowing us to tell this story challenges and how the company overcame them.